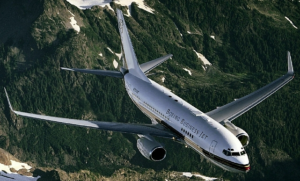 Luminary Air Group has, by far, the most experience in wide-bodied aircraft thermal & acoustical treatments. We have treated over 50 Boeing Business Jets with our Flight Environments Cabin Comfort System since we entered the market over a decade ago. More importantly, we have been a part of many of the most aggressive noise reduction efforts undertaken with this aircraft & with great success. Most recently, we were awarded a contract directly from Boeing to design, fabricate, and install insulation kits for two BBJs.

The Flight Environments insulation kits have set the mark for the quietest BBJ cabin average as verified by two independent acoustical firms. The graphic below shows the before and after noise levels for different parts of the cabin on that aircraft: 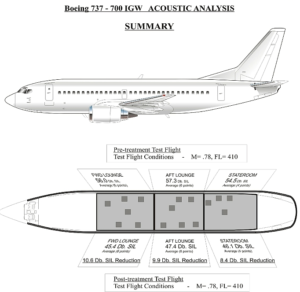 Luminary Air Group has built a strong relationship over the last decade with the D.O.D and its largest vendors. Luminary has been involved in Government aircraft interior work in some form since our inception in 1998. Some of our past programs include, but are not limited to:

We have completed the interiors of all E-4B aircraft. Designing and flight testing the quietest conference room in the sky for a 747, all of our staff are particularly proud to be a part of this team.

We were challenged by the Air Force to reduce the cabin sound levels and refurbish the interior panels in a KC-135, paying special attention to the Boom Pod Area. Data was acquired, both acoustic and thermal, on multiple flight tests and the resulting acoustic analyses allowed Luminary to develop a system whereby the cabin sound levels were greatly reduced and the Boom Pod Operator was provided a huge improvement in his working environment.

Luminary was recognized for its success by the end-user, and today offers systems for both the aircraft cabin and the Boom Pod.